This invoice show that S G. Hall paid "Peterson and Rulfs, Dr., Wholesale and Retail Dealers in Boots, Shoes, and Shoe Findings." $7.50 on his debt of $9 on August 15, 1906. About halfway down the statement, it says, "Pay others as you would have them pay you."

This invoice is part of a collection of bills, invoices, and mortgage receipts donated to the Museum by Loleta Adkins in 1991. Ms. Adkins donated more than 1,500 pieces to the Museum. Most of them date from the turn of the century. Many of them document aspects of the lives of Samuel Greene Hall (1836 to 1911) and Mary Florence Huggins Hall (1843 to 1922).

William C. Peterson and John Rulfs, Jr., became partners in a shoe dealership in the 1890s. They stayed in business together into the early 1930s. Their shoe store was originally located at 7 North Front Street, but moved to 202 North Front Street in the 1900s. The downtown commercial area centered on Front and Market streets was home to a number of shoe stores and dealers. 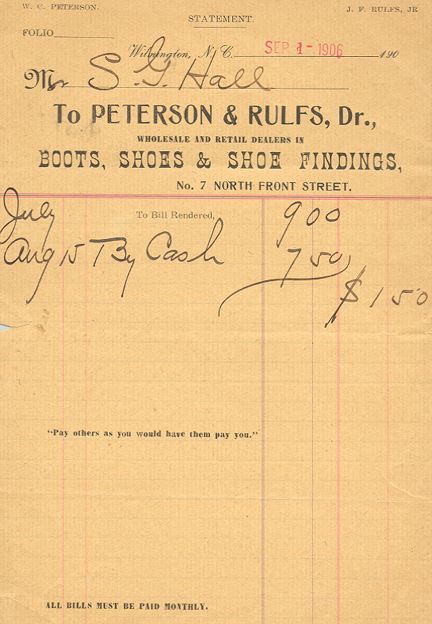