This Western Union telegram is 6.46 inches high and 8 inches wide.

In 1990, Arthur Bluethenthal (1923 to unknown) gave the Museum a collection of materials relating to his namesake uncle, Arthur Bluethenthal (1891 to 1918). Cape Fear Museum has hundreds of photos of, and taken by, Arthur Bluethenthal, as well as medals, diplomas, telegrams, and other materials relating to his family, his life and military service. Leopold Bluethenthal (1860 to 1928) was the Wilmington Bluethenthal family patriarch. Leopold worked for his uncle, Frederick Rheinstein in the dry goods business. He became a partner in the business in the 1880s, and he was a succesful local business man. Leopold migrated to the United States from Germany in the 1870s, and married Johanna Dannenbaum (1867 to 1933) in the 1880s. The couple had three children who lived to adulthood: Herbert (1890 to 1971), Elsa (1896 to present), and Arthur (1891 to 1918).

On June 19, 1918, Leopold and Johanna Bluethenthal received the kind of wartime telegram that everyone with a loved one in combat fears. It confirmed the news that their son, Arthur, had died fighting for the Allied cause in Europe. Arthur Bluethenthal was the first Wilmingtonian to die in combat during the First World War.

The son of German immigrants, Arthur was born in Wilmington in 1891. Arthur's parents came to Wilmington after the Civil War. Leopold worked for his uncle's wholesale dry goods business, and eventually owned the operation. The family prospered. They lived on Dock Street, had a cottage at Wrightsville Beach and, at the time of the war.

Arthur received his early education in Wilmington, and then attended the prestigious Philips Exeter Academy between 1907 and 1909. In 1913, Arthur graduated from Princeton University, where he had been a football star. After graduating, Bluethenthal went to work for his father's business, and coached football at the University of North Carolina at Chapel Hill and at his alma mater, Princeton.

In 1916, after World War had raged in Europe for two years, Arthur joined the American Field Service in France where he became a member of the ambulance service. He later joined the French Foreign Legion and became an aviator. His plane was shot down near Maignelay, about fifty miles north of Paris, on June 5, 1918.

Arthur was a decorated war hero before his death, and the French government posthumously awarded him the Croix de Guerre with Palm on June 9, 1918. Bluethenthal was buried in Europe, and then in the early 1920s, his body was reinterred at Wilmington's Oakdale Cemetery.

When news of Bluethenthal's death spread, the whole of Wilmington stopped to honor the fallen man's service. Then-mayor P. Q. Moore ordered all the flags in the city to fly at half mast. And on June 20th, local businesses closed for one hour at lunch time. At that time, mourners poured into, and overflowed the capacity of, the Academy of Music, as Thalian Hall was then called. At the Academy of Music they heard speeches by the mayor, and speeches and prayers by local religious leaders, including a moving prayer by Dr. Samuel Mendelsohn (1850?- September 30, 1922) who was the rabbi of the Temple of Israel, the Bluethenthal family's place of worship. The stage was decorated with flags of the allied nations, and a portrait of Bluethenthal was at the front and center of the stage. Laurel wreaths were sent by groups such as the alumni of Princeton, the Rotary Club, the Red Cross, and the Temple of Israel and hung around the portrait. A flag with a single gold star hung above the portrait. Chopin's funeral march was played. 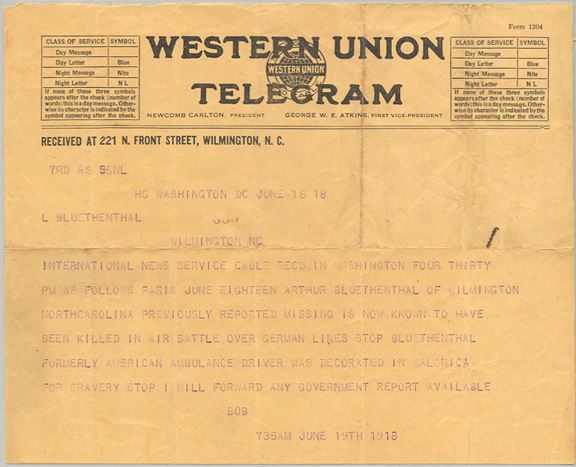