In 1989, the New Hanover County Community Appearance Commission gave the Museum a number of artifacts relating to the dedication of a new Dram Tree. The Museum also owns a number of other related artifacts - including a mug, and pictures of the old Dram Tree in the river.

In July 15, 1989, at 3 pm the city of Wilmington held a ceremony to officially dedicate a new Dram Tree at the tiny urban park at the foot of Castle Street. At the dedication, which was emceed by Harry Warren (who worked at the Museum), attendees were entertained by music, and then the new Dram Tree was dedicated by the Mayor, Donald Betz. Speeches were made by a captain from the Coast Guard, Revolutionary and Civil War reenactors performed for the crowd, and local historian Bill Reaves told the crowd the history of the original Dram Tree.

The park was named in honor of an ancient tree, and a long-held local maritime custom. The original Dram Tree was a gnarled cypress that stood in the river on the way into Wilmington. Apparently, sailors would have an adult beverage (the "dram "part of its name refers to a unit of alcohol), on their way in and out of port. Legend claims they toasted their successful navigation through the treacherous waters when coming into Wilmington from the ocean. And, they raised their glasses for good luck on their journey when on their way out of port. The tree's long life in the river came to an end in the 1940s. There are a number of different versions of the story of the tree's demise. 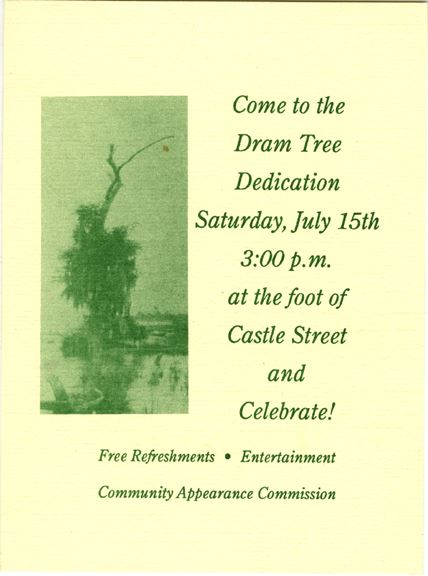