The charter is 1 foot 4 inches in height and 10 inches in width, is made of paper, is heavily yellowed and stained, and has been cleanly ripped into several pieces along creases created by folding the document. The charter contains the handwritten names of Navassa Guano Company of Wilmington's founders and the Great Seal of the State of North Carolina is affixed in the bottom left corner near the signatures of Governor William Woods Holden (1818 to 1892) and Secretary of State Dr. Henry J. Menninger (1838 to 1889).

The founders of the Navassa Guano Company of Wilmington who signed the charter are: Robert Rufus Bridgers (1819 to 1888), a Tarboro, North Carolina native who worked as an attorney and politician and spent part of his life in Wilmington; George W Grafflin (1821 to 1896), a businessman involved with the dry goods, burlap bags, and fertilizer trades who was a native and life-long resident of Baltimore, Maryland; William Augustus Wright (1807 to 1878), a North Carolina native and longtime Wilmington resident who was an attorney, president of the Bank of the Cape Fear, and counsel for the Wilmington and Weldon Railroad; Joseph A. Englehard (1832 to 1879), a native of Monticello, Mississippi who he spent the bulk of his life in North Carolina (Tarboro, Wilmington, and Raleigh) and worked as an attorney, politician, editor of the Wilmington Journal, and was a major in the Confederate army during the Civil War; Michael Cronly (1826 to 1898), a native of New York City who was raised in Wilmington and worked as a merchant, an auctioneer, blockade runner during the Civil War, president of the Wilmington, Rutherford and Charlotte Railroad Company, and as a fertilizer manufacturer; Walter E Lawton (c. 1829 to unknown), was a capitalist and fertilizer manufacturer who, in March 1887, disappeared after emptying his bank accounts and divesting himself of real property-contemporary estimates claim he defrauded his creditors in the amount of $1,000,000 through unwise investments and dealings in heavily discounted financial instruments; John Clarke Grafflin (1829 to 1888), a native and life-long resident of Baltimore, Maryland, who spent his life in the business of manufacturing burlap bags and fertilizer; Francis W Kerchner (c. 1829 to unknown) was born in Baden, Germany and, after moving to the United States, lived in Baltimore, Maryland and Wilmington working as a shoemaker, grocer, and merchant.

In 2009, Carl Palmer LaVo (born June 15, 1924 in California) donated this charter to the Museum. He worked in the fertilizer business and retired in 1984 after 38 years with Estech, a subsidiary of Swift Packing and Fertilizer Co. Estech operated a factory in Navassa, North Carolina on the original the site of the Navassa Guano Company works. In 1980, Estech moved its offices from downtown Wilmington to the plant site. Mr. Lavo, in the course of cleaning out the downtown offices, saved this charter from being thrown away.

This charter established the Navassa Guano Company of Wilmington, North Carolina for the purposes of manufacturing fertilizer and chemicals, mining and working the necessary ores, and such other activities necessary to the manufacture and sale of fertilizers and chemicals.

The Navassa Guano factory was built in 1869 at Meares' Bluff on the northwest branch of the Cape Fear River five miles from Wilmington. This location was chosen because the geographic features allowed the construction, in 1867, of a railroad bridge across the Cape Fear at what would become Navassa. This allowed several railroad companies, the Atlantic Coast Line, the Seaboard Airline, the Wilmington, Columbia and Augusta, and the Carolina Central, to connect Wilmington with numerous points throughout the southeast. Members of Wilmington's business community realized the advantages of constructing a fertilizer factory on the railroad.

Soon after the Navassa Guano works were built a village grew up around it which, in 1885, was named Navassa by the U.S. Postal Service. The modern Town of Navassa was incorporated in 1977 and is located about a mile west of the original village.

The Navassa Guano Company of Wilmington was organized with capital stock of $200,000 and, at its first meeting, elected Robert Rufus Bridgers president, Donald MacRae (1825 to 1892) treasurer, and Christopher Louis Grafflin (1823 to 1887) superintendant of the works. These men held those positions until at least 1887 by which time, Col. William Lord DeRosset (1832 to 1910) was added as superintendant of agencies and Charles Eugene Borden (1861 to 1913) was the company's chemist. By 1887, the Navassa Guano complex consisted of twenty-four buildings with a floor space covering five acres with each building dedicated to a particular aspect of the manufacture of acid phosphate fertilizer. In the late 1880s, around 1,000 people in the Wilmington area derived income, either directly or indirectly, from the Navassa Guano Company. In 1890, Donald MacRae had become president of the Navassa Guano Company, Donald MacRae, Jr. (1861 to 1928) served as secretary-treasurer, Charles Eugene Borden as superintendant of the works, and Col. William Lord DeRosset was superintendant of agencies.

The company was named after the island of Navassa which is located in the West Indies; south of Cuba, east of Jamaica, and west of Hispaniola. The island was claimed by the United States in 1857 under the auspices of the Guano Islands Act of 1856 (48 USC. Ch. 8 §§ 1411 to 1419) due to its deposits of Guano phosphate, a high quality organic fertilizer that was extensively used in American agriculture during the 19th century. 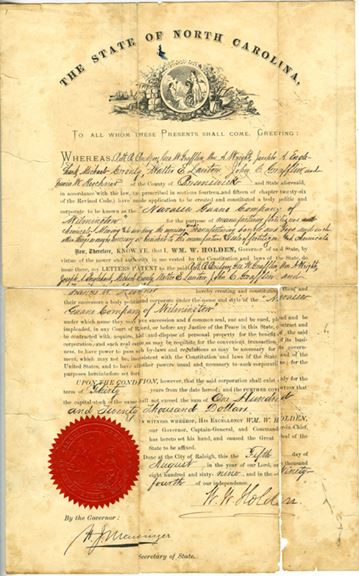