The photograph on this page is approximately 8 inches by 10 inches.

In 2008, staff in the New Hanover County Manager's office cleaned up their files. They gave Cape Fear Museum a number of county-related photographs. This photograph was one of the items.

Work began on the local airport, then known as Bluethenthal Field, in 1927. It was formally dedicated to the memory of Arthur Bluethenthal (1891 to 1918) who was the first Wilmingtonian to be killed in World War I. Arthur was the son of Leopold Bluethenthal (1860 to 1928) and Johanna Bluethenthal (1867 to 1933). In 1916, he went to France where served with the American Ambulance Field Service from May 6, 1916, to May 11, 1917. He then enlisted in the Lafayette Escadrille, a section of the French Air Service. He was killed in combat in June of 1918.

In the 1930s, the airport was expanded using funds from the New Deal agency, the Works Progress Administration. After the U.S. entered World War II, the airport was taken over by the army for the war's duration. The airport has had many names since then: in the 1950s, it became the New Hanover County Airport. In the late 1980s, the airport authority added the word International to the name (even though there were no direct international flights out of Wilmington) just before a new terminal building opened. In 1997, the airport changed its name again to Wilmington International Airport.

On February 20, 1948, new airline company the Winston-Salem-based Piedmont Airlines made its maiden flight, taking off from Wilmington for Cincinnati. That first flight took more than four hours, and the plane made five stops along the route. Piedmont began operations with three planes. The airline built its base by stopping in lots of small places around the southeast, picking up passengers. By 1959 the airline carried over half a million passengers. Piedmont remained in business until 1989, when it was taken over by USAir. The last Piedmont flight out of Wilmington took off on August 4, 1989. 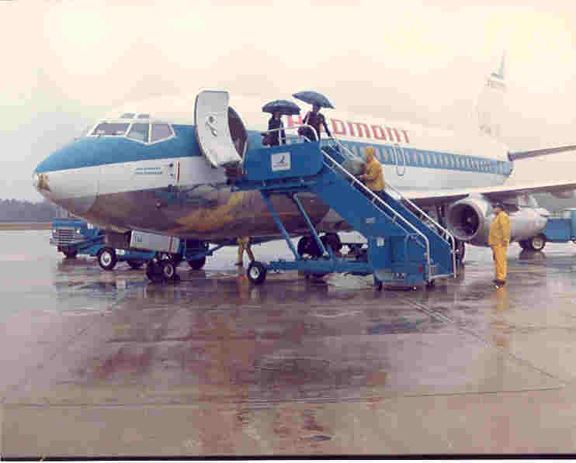