A Story of Slavery and a Failed Flight Towards Freedom

In late 2019, the Schlafer family offered to donate two letters to the Cape Fear Museum. Jason Schlafer, a Social Studies teacher, used the letters as a teaching tool for his students. They were offered to Cape Fear Museum because they tell a local story. The County Commissioners approved the donation on February 3, 2020.

These two letters provide an unusual window into slavery in New Hanover County and the South in 1849 to 1850. At the time, New Hanover County, home to Wilmington, was the largest city in North Carolina, and enslaved men, women, and children made up 49% of the county’s population. While most enslaved people did not run for freedom, the local papers regularly published ads searching for runaways. These ads show that some people did try to escape from their circumstances. These two letters help tell the story of two enslaved people’s attempted escape in a richer and more nuanced way than a newspaper ad. 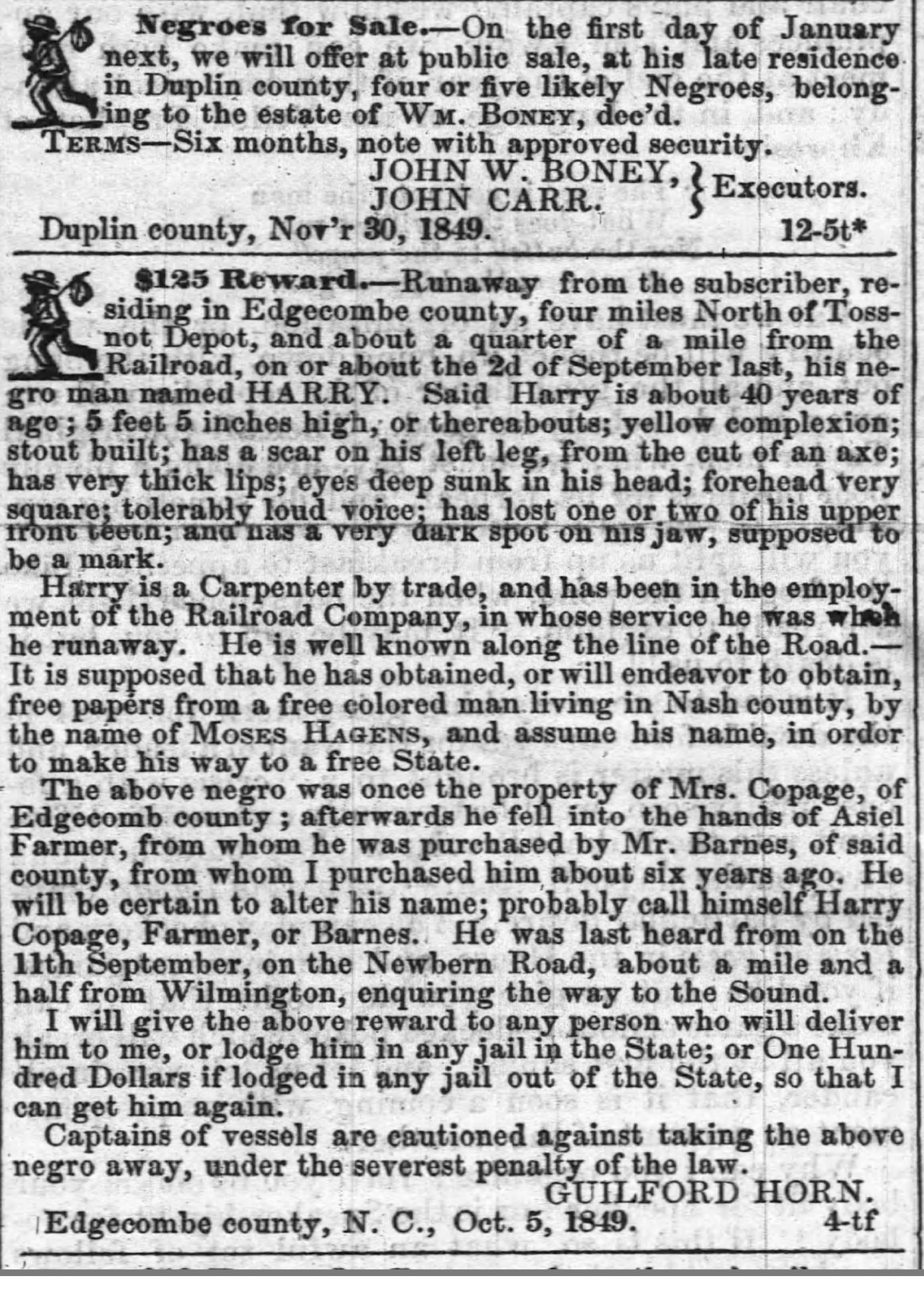 The first letter of the two we received, written by the mayor of Norfolk, Virginia, W. D. Delaney to William C. Bettencourt let Mr. Bettencourt know that one of the people he enslaved had been caught on board a ship, running toward freedom in New York. 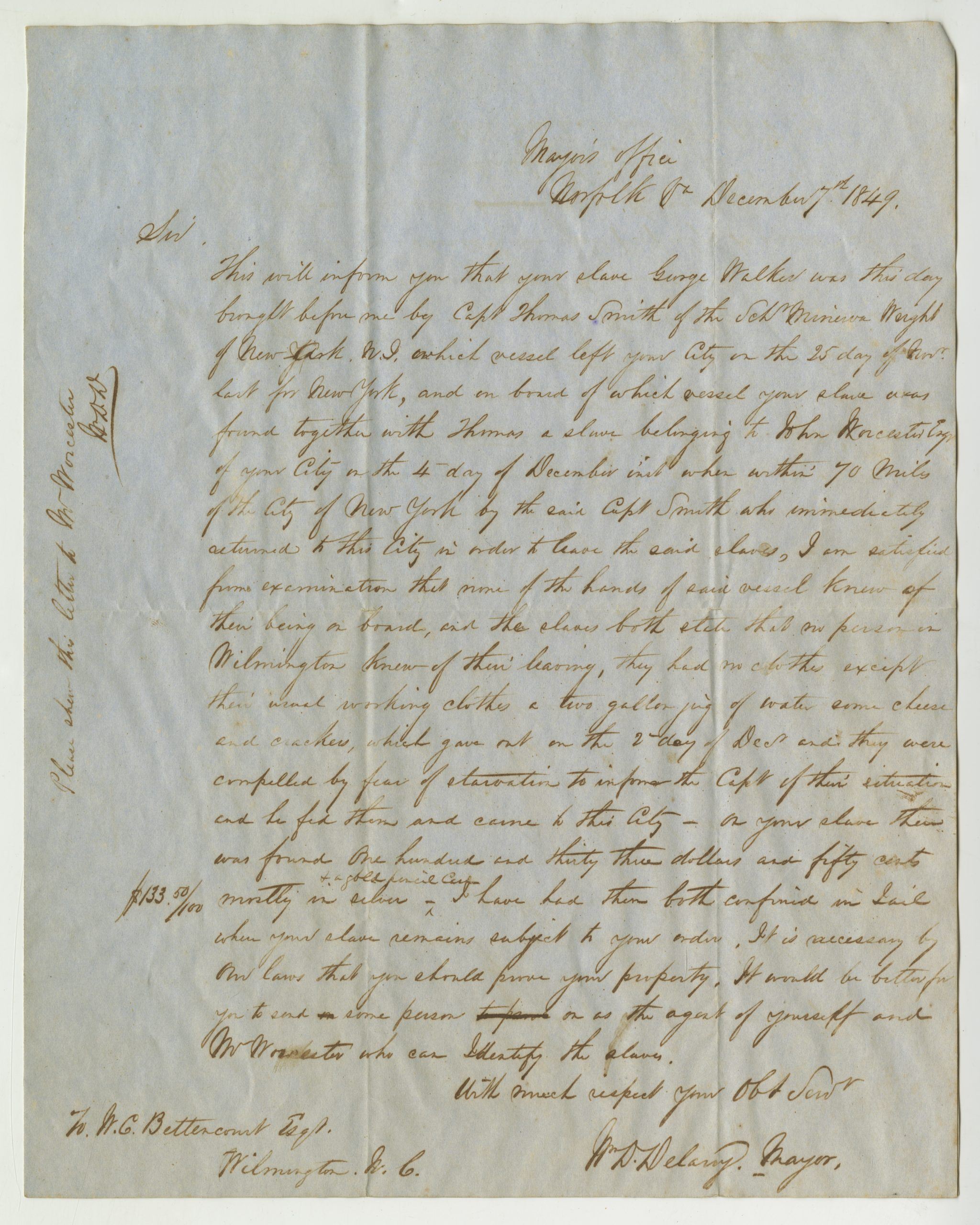 George Walker and a companion, Thomas, had crept onto the schooner Minerva Wright on November 22, 1849, three days before the vessel left Wilmington. The pair hid themselves away, with some food, water, and money. Unfortunately, George and Thomas did not have enough provisions for the trip, so they made themselves known to ship's captain Thomas Smith on December 4, 1849. Smith turned around and took his vessel back to Norfolk, Virginia, described in newspaper accounts as the nearest Southern port-where he handed the two men over to the local authorities. 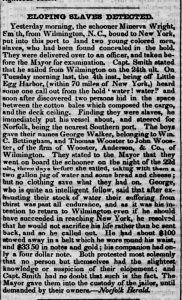 Norfolk's Mayor Delaney wrote to William C. Bettencourt to ask him to come and prove his ownership of George, and to tell the owner of Thomas, Mr. Wooster, that he was also in custody. Mayor Delaney's letter provides some intriguing details about what the two men took with them. George seems to have saved for freedom; he had $133.50 in cash on him. There's no suggestion that this money was stolen in the letter. This perhaps means that George, who is described in a newspaper account of this incident as "quite an intelligent fellow," hired himself out. Some urban enslaved people, especially those who were skilled workers, paid their enslavers a yearly sum and kept the rest of the money they earned. William C. Bettencourt's will suggests that he was in the habit of hiring out enslaved people, so this is not a far-fetched conclusion. Thomas, the second person discovered on the schooner, was less financially prepared to make a new life for himself in the North: he fled with only four dollars.

The mayor's letter and newspaper accounts also noted that the men ran away from Wilmington without aid from either the crew of the vessel or anyone else. This was noted because North Carolina laws made it a felony for a ship captain to knowingly transport an enslaved person across state lines without the consent of the enslaver. Perhaps Captain Smith returned to Norfolk and the South with the men to support his claim he knew nothing about the stowaways and was not trying to help the men escape to the North. 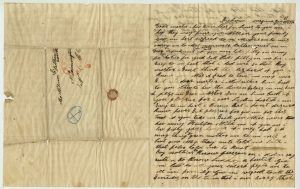 Thomas quickly disappears from the historical record, mentioned only in the letter from the mayor and in the initial newspaper accounts of the discovery on the Schooner Minerva Wright. George seems the more intriguing character from the start: he had a different last name than his enslaver, had more money, and was described as intelligent. Even though he was caught trying to escape slavery with $133.50 on him, George immediately tried to claim that "…it was his intention to return again to Wilmington even if he succeeded in reaching New York…" To a modern reader's eyes, this seems like an attempt to try to downplay the planning and ingenuity that George displayed as he ran for freedom. Knowing that he wasn't going to escape enslavement, George may have been trying to paint himself in a better light in the eyes of the man who claimed ownership of him.

We also know more about George's fate. Three weeks later, in January 1850, George, now referring to himself as George Bettencourt, either dictated or wrote a letter to his "master," asking to be returned to Wilmington. 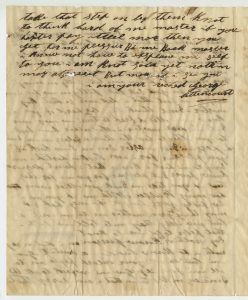 George's letter to William C. Bettencourt follows some of the conventions of polite letter writing. He asks about Bettencourt's family and assures him that George's grandmother and aunts did not aid in his escape. Again, this may be a way of trying to protect his family from the suspicion that they may have helped him try to run to freedom. In a discomfiting part of the letter, George also rhetorically throws himself at his enslaver's mercy, asking for forgiveness and to be bought back. George claimed that "if you take me back, you will never have any trouble with me…" The letter suggests George believed that he had already been sold and that Mr. Bettencourt would need to buy him back to get him back to Wilmington. We have no real knowledge of whether George was right about that. He'd been in Virginia for less than three weeks, and there is no sense in his letter that he'd seen Mr. Bettencourt, so it seems unlikely he'd already been sold. But being sold away from all you knew was always a possibility under slavery, and it must have been something that George worried about even before he tried to emancipate himself by flight.

This letter is a rare example of a piece of writing that documents an enslaved person's experiences in their own words. And it's the last piece of historical evidence we have about George Walker. We do not know what happened to him: maybe William C. Bettencourt listened to George's plea to return to his family in Wilmington, or maybe he left him in Richmond to his fate on the auction block. By 1849, if George was sold in Richmond, he was likely sold to an enslaver in the Deep South. If that were the case, George likely would have ended up in Natchez or New Orleans, and also likely would have never seen his family again.

These two letters raise so many unanswerable questions. What motivated George Walker (Bettencourt) and Thomas Wooster to run? Why did George ask to be bought back by his enslaver? Did George write his letter or dictate it? If he wrote it, when and how did he learn how to write? What happened to George and Thomas? Did either man find their way to freedom before the Civil War, or did they live through it to see and experience emancipation?

We can also see family separations in the pages of the newspaper, where in December 1849, around the time that George and Thomas were being caught on board the schooner, the Wilmington Journal included advertisements that sought the whereabouts of other men and women who tried to escape from slavery. 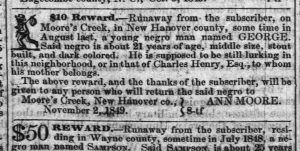 We can also research William C. Bettencourt and John Wooster. Mr. Bettencourt was extremely well to do, and had a large stake in the slave economy. He enslaved 43 people in 1840, 60 people in 1850, and 95 in 1860. He was listed as a merchant in both the 1850 and 1860 census. In 1860, he was the third largest enslaver in the county. His last will and testament, written in 1860, reflects the wealth he’d accumulated and shows that he owned a great deal of property in the city, as well as stocks, bonds, and enslaved people. Bettencourt died in 1862, and is buried at Oakdale Cemetery. He left 20 enslaved people to his wife and then ordered the rest sold, so if George was returned to his ownership, then his future – like the future of all enslaved people, was controlled by others, and always filled with uncertainty.

Thomas's enslaver, John Wooster, was also a longstanding resident of the county, and a longstanding enslaver. Wooster enslaved 35 people in 1850 and 26 in 1860. In 1860, he ranked in the top 10% of enslavers in New Hanover County by number of people enslaved. John Wooster's relationship to slavery also illuminates some of the variation in the system: his firm, John Wooster and Company, was listed separately as an enslaver in 1860. Wooster had his fingers in a number of enterprises - he was listed as a merchant in the census but also was connected to a turpentine distillery, owned part of a steam saw mill, and traded in real estate. In 1852, Wooster's company, known at that time as Wooster, Anderson, and Company, put 8 "likely negroes" up for sale, so he was in the business of trading in enslaved people. 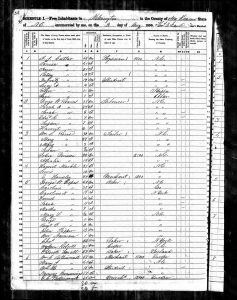 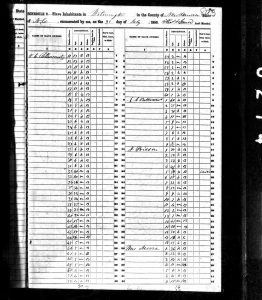 As this brief account of the two men who enslaved George and Thomas suggests, it is far easier to trace rich white men though the historical record than enslaved people and poor people. Still, while we will likely never be able to track George or Thomas past this failed attempt to escape enslavement, these two letters let us think through some of the complicated ways slavery functioned in the U.S. in the antebellum period. They are a rare window into the past, and we are very grateful to the Schalfer family for donating them to Cape Fear Museum. 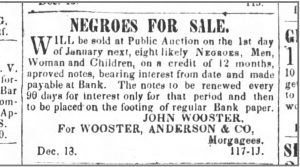